“Dark and twisted, a complicated puzzle with pieces put together with perfect precision.” 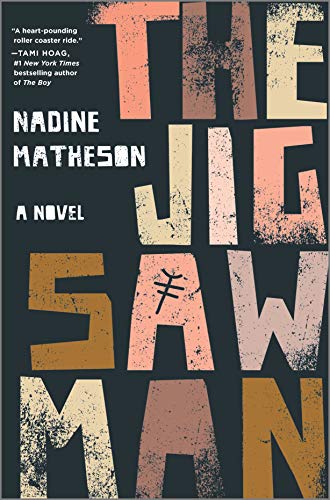 A serial killer and his copycat are locked in a violent game of cat and mouse. Can DI Anjelica Henley stop them before it’s too late?

On the day she returns to active duty with the Serial Crimes Unit, Detective Inspector Anjelica Henley is called to a crime scene. Dismembered body parts from two victims have been found by the river.

The modus operandi bears a striking resemblance to Peter Olivier, the notorious Jigsaw Killer, who has spent the past two years behind bars. When he learns that someone is co-opting his grisly signature—the arrangement of victims’ limbs in puzzle-piece shapes—he decides to take matters into his own hands.

As the body count rises, DI Anjelica Henley is faced with an unspeakable new threat. Can she apprehend the copycat killer before Olivier finds a way to get to him first? Or will she herself become the next victim?

When I read that this book takes place in the area of London that my daughter used to live, when she was a Nanny, I was immediately intrigued.

The Jigsaw Man was an intriguing read that had me coming back, night after night, to find out more. You know right up front who the JigSaw Killer is – and he’s as twisted as you would expect, and turns out, he doesn’t like that there’s a copycat out there, using his methods.

There are a lot of games being played within the pages of this story and you’re never raeally sure how it’s going to turn out. Anjelica Henley is an imperfect woman with a life that falls apart around her. I think she’s one of my favorite characters that I’ve read in a long time.

If you like crime reads, if you like puzzles and complicatd characters, you’re going to enjoy this story!

#weekend vibes. There may be some baileys in my ho

Somehow this cup is empty. I don’t remember drin

And like that, the novel that almost broke me as a

Some days, you can never have too much coffee. Tod