Where I Left Her

“A classic mother/daughter story with a twist, and an ending you don’t expect.” 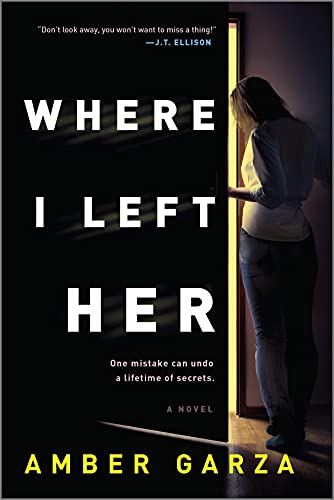 Whitney had some misgivings when she dropped her increasingly moody teenage daughter, Amelia, off at Lauren’s house. She’d never met the parents, and usually she’d go in, but Amelia clearly wasn’t going to let something so humiliating happen, so instead Whitney waved to her daughter before pulling away from the little house with the roses in front.

But when she goes back the next day, an elderly couple answers the door—Amelia and Lauren aren’t there, and this couple swears they never were, that she’s at the wrong house. As Whitney searches for Amelia, she uncovers a trail of lies her daughter has told her—from the Finsta account to rumors of a secret relationship. Does she really even know this girl she’s raised? And Amelia’s not the only one with secrets. Could Whitney’s own demons have something to do with her daughter’s disappearance, and can Whitney find her before it’s too late?

I finished “Where I Left Her” by Amber Garza last night and boy, that ending was a kicker!

The beginning was promising – showed the dynamics between and mother and daughter – a dynamic I can understand and appreciate with 3 of my own. I found myself sympathizing with both the characters – understanding the drive and desire to always protect a child and being able to see how the teenager might see the mom as controlling, dominating…it’s a tight line we walk as parents, that’s for sure.

There were a lot of twists, twists I didn’t see, didn’t expect and some I did. The plot was entwined with the past, mainly between the mother and daughter, and I often found myself wishing that it would go deeper, past the need to give more of a history and understanding.

There’s also a second storyline woven in, one that leaves you often questioning which characters you’re really reading about – in a good way.

Do I recommend Where I left Her? Yes. If you like a good domestic suspense with a twist, if you want an ending that isn’t all wrapped in a bow…then you’ll enjoy this book, like I did.

Walking through the street of Paris, you stumble u

I’ve bought many a things from these vendors on

This about sums me up right here! I love having th